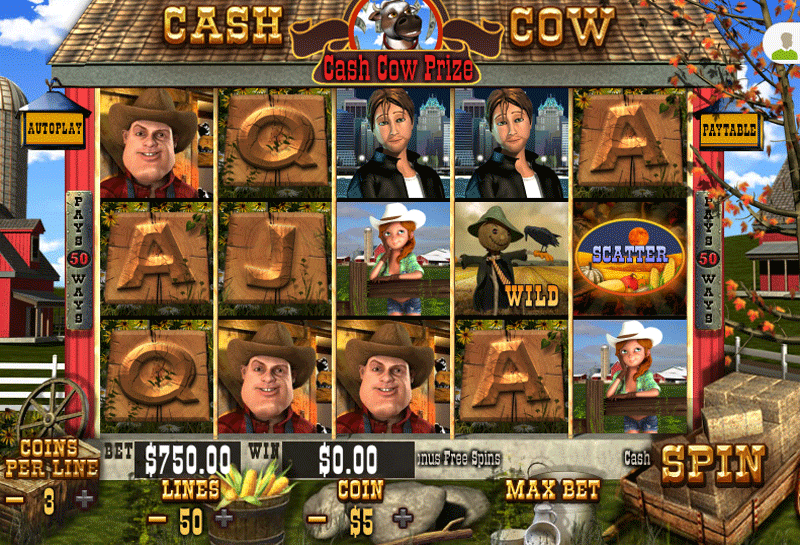 One of the first things to know about Cash Cow slots is that there are half a dozen bonus features. If you love winning cash in unexpected ways, this slot game delivers in style. To start, you need to set a wager. There are 50 lines, and you can bet up to 3 coins on each line. With coin values ranging from a penny to $5, it's easy to risk a lot or bet conservatively.

At the heart of the game is the farmer. Jed runs the entire farm and dotes on his daughter. Daisy may be the farmer's daughter, but she has her sights set on her city slicker boyfriend. Those three characters appear on the reels and pay up to 1,000 (Jed), 500 (Daisy), or 350 coins (the boyfriend). There's a wild scarecrow that pays the most at up to 2,000 coins.

Five more symbols appear on the reels and offer payouts ranging from 5 to 40 coins (10) to 15 to 200 coins (A). These round out the paying symbols. Everything else triggers one of the many bonus features.

Details Regarding All of the Bonus Features

Cash Cow slots stands out because of its ample number of bonus features. Start with Kooky Chicken. When the chicken appears on the third reel, you get an instant cash prize worth 600 coins.

There's a Super Scatter Harvest Moon. It appears in groups or by itself on the reel and can be rewarding. When they appear, you win bonus scatter prizes of:

The Cash Cow symbols also trigger an instant cash prize. If the cow appears two, three, or four times, you'll win a percentage of the jackpot shown at the top of the reels. Two cows give you 1 percent. Three and four give you 10 percent and 100 percent, respectively. This bonus is worth as much as 12,500 coins.

Piglets in a basket are adorable. They're also wild symbols. When you get three of them on the second reel, you get a respin with that wild reel locked in place.

The gallon of milk leads to a pick 'em bonus. You'll find the milk jug on the first, third, and fifth reels. When you get three gallons of milk, you'll pick up to four milk jugs and win prizes totaling up to 2,000 coins.

There's one more bonus. This one triggers randomly after your spin. You'll get 10 free spins. During those spins, you get larger payouts. The scarecrow is now worth up to 4,000 coins. Jed is worth up to 2,000 and his daughter pays as much as 1,000. Her boyfriend is now worth as much as 700 coins. The K and A round things out with top prizes of 200 and 400 coins.

All that's left to do is play Cash Cow slots. Every spin can lead to pretty amazing features and prizes. Play it today.