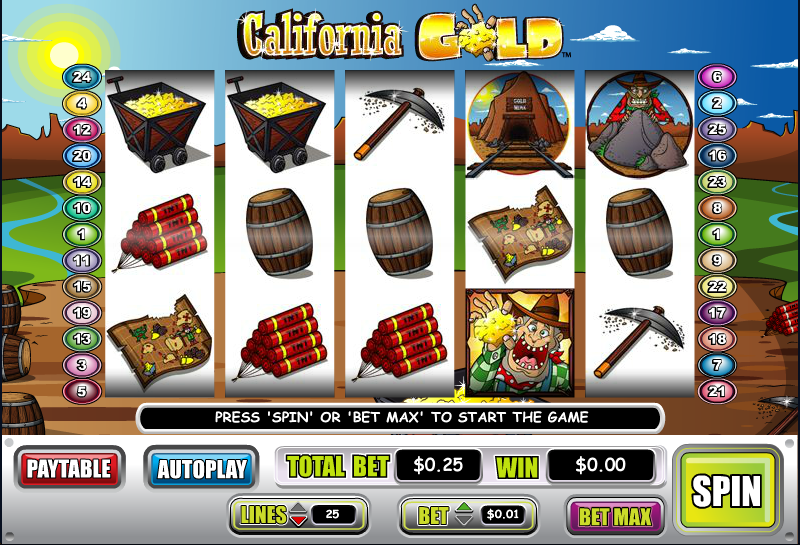 Will You Strike it Rich Playing California Gold Slots?

Head back to the days of the Gold Rush in California Gold slots. The game's 25 lines allow you to risk up to $10 per line. Embrace little risk with a penny bet or go all the way to the maximum bet of $250 per spin. With whatever wager you select, you stand to win as much as 5,000 coins on a line, and it doubles if the wild is part of the winning combination.

It's a Mining-Themed Slot With Two Bonus Features

With two bonus features, there are extra ways to win cash in California Gold Slots. First up is the free spins bonus. Three or more gold nuggets lead to 10 free spins. Any winnings collected during the free spins are tripled. You could win a very impressive payout of 15,000 on a line this way.

The second bonus feature occurs when the miner appears on the second, third, and fourth reel together. A new screen loads and shows you four gold mines. Pick one and watch the miner ride the mine cart down the mine. He'll grab gold nuggets along the way. The weight of the gold is totaled and multiplied by your bet.

What Other Prizes Are Offered?

Prizes in California Gold Slots vary. The pickax and barrel pay up to 100 coins. Four symbols (lantern, map, dynamite, and gold pan) pay up to 150 coins. There are two more symbols that require three matching symbols to win a prize. That's the mine cart and the donkey that both pay as much as 200 coins.

The two highest prizes are linked to the villain (5 to 5,000 coins) and the gold mine (2 to 500 coins). The gold nugget scatters can be equally rewarding with a top prize of 100 times your total bet rather than the coin value.

The miner has no prize attached, but he does have value. He triggers one of the two bonus features. He also serves as a wild symbol and doubles the prize of any winning combination he's in.

Pick a wager that suits your comfort level. Once that's done, spin the reels. The game has some animations and a few sound effects that add a level of amusement. It's not a hard game to play, but it can be one of the more rewarding slots as the prizes are doubled and tripled. Play California Gold Slots now and see what the miner has in store for prizes.